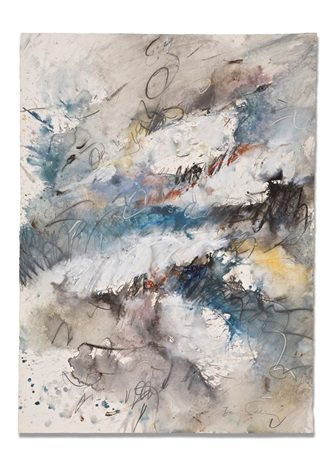 This is an excellent example of original Salinas work on paper, that is from the mid-80's. This was a particularly rich period for Salinas, who was deeply influenced by the Abstract Expressionists, and his mentor Joan Miro, who he studied with for years, in Barcelona. Salinas is quoted as saying: "Because of my connection and collaboration with poets and writers such as María Zambrano, José Angel Valente, Pere Gimferrer, and Michel Butor, I developed a concept of the language of the clouds. This consisted basically of a grey background with white as the main color of my palette–the white symbolizing clouds. I also used pictograms, ideograms, and strange alphabets like the Greek alphabet, the Hebrew alphabet, and the Iberian alphabet". On another occasion Salinas was quoted as follows: "To me, painting is not work. It is something that transcends labor. I love to be in my studio painting because I forget about everything else. I’m so concentrated on it that it is like a meditation. I concentrate on what I’m doing and I enjoy it while I’m doing it. I enjoy seeing a wide space being developed into something that has life. It’s always been the most important thing in my life. And architecture was never so.”